Brazilian butt lift before and after reviews

We know well that, when it comes to planning cosmetic surgery, the safety of the procedure is just as important as being satisfied with the long-term results. For this reason, at Cosmetica group® we believe that it is important for you to know the technique that the plastic surgeon is going to use, and the testimonies of our patients, in addition, to seeing with your own eyes and comparing the BBL before and after results of the people who, just like you wanted amazing results.

The surgical approach that is applied in the Brazilian butt lift is a technique that seeks to strategically reshape the body fat to highlight the curves of the body, giving a sexy and natural appearance.

First, the characteristics of your skin should be evaluated, mainly the elasticity and type of scarring; In addition to the distribution and percentage of fat in your body, to plan which areas will undergo the initial extraction of fat (liposuction), later determine the amount of fat and volume that will be used to achieve those curves.

Below we share the before and after BBL results of some of our patients, and a breve explanation of the differences according to their intrinsic characteristics. 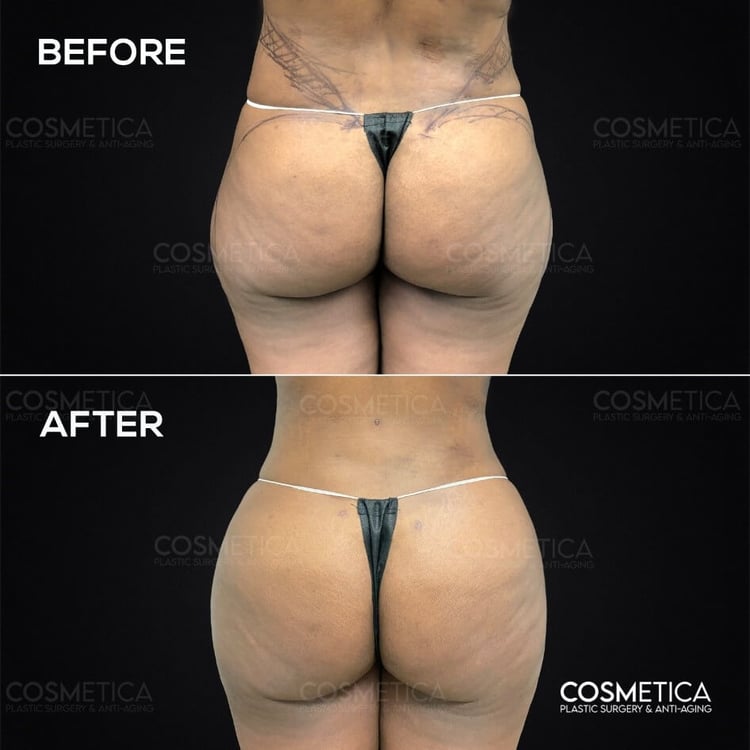 Our first patient had a good pre-surgical gluteal volume, composed of both gluteal muscles and subcutaneous tissue (fat), the elasticity of the skin was moderate, finding a little loss of turgor and skin tone. In this patient, liposuction was performed primarily on the waist, trunk, and lower back with the aim of narrowing the waist circumference, and then applying a portion of the extracted fat to add volume to the medius and upper gluteus. In this patient, Renuvion® technology was applied, which is a technique that uses radiofrequency or plasma to produce tissue contraction (of collagen fibers in the skin), eliminating skin flaccidity and improving its adherence to deep tissues. As you can see in the medial part of the buttocks (middle area), Renuvion® technology is excellent for giving a toned and firmer appearance. 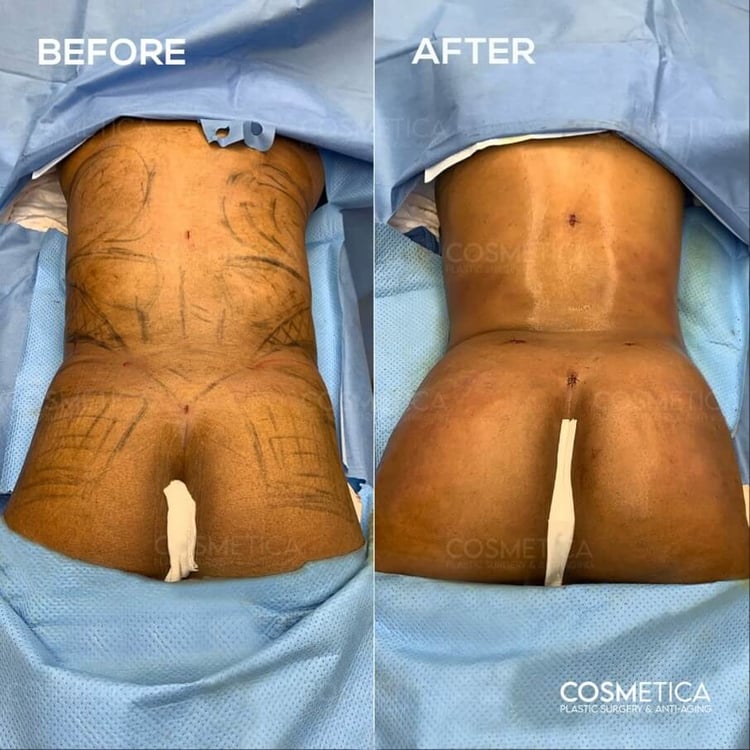 Our second patient has phenomenal skin elasticity. The objectives of the procedure performed were mainly to reshape the gluteal area, extracting fat from the trunk in its 360 degrees, subsequently applying most of the extracted fat in the 3 areas that make up the buttocks (upper, middle, and lower area). As can be seen in the photographs, the hourglass shape in this patient was achieved primarily by adding volume to the back and sides of the hip. Renuvion® technology provides extra turgor, giving the skin an immediate rejuvenated appearance.

Our third patient initially underwent liposuction focused on the lower abdomen, in order to give a narrower appearance to the lumbar and iliac areas of both the front and back of the trunk. Subsequently, the extracted fat was applied in a way that sought to standardize the volume and generate a more rounded appearance to the buttocks. With this patient, Renuvion® plasma energy was also applied in a generalized way to both the buttocks and the abdominal area and back, so that after liposuction the adherence of the skin would be tighter.

As seen and explained above in our patients’ pictures, the design of the surgery is always personalized. Our surgical team will always evaluate your body type and its shape, before carrying out the design and planning of the procedures, in order to determine the areas of your body with the greatest predisposition to store fat.

The technique for fat extraction, as well as the volume and amount of fat that is applied later, will depend on your goals, but also on the characteristics of your skin and body shape.

In the same way, the application of complementary techniques such as plasma or radiofrequency will be recommended so that your skin achieves better adherence to the subcutaneous tissues and favors both volume and body shape, as well as the quality and texture of the skin in the short and long term.

Send your questions and comments, we want to meet you and help you get that body you deserve. And if you want a consultation call 772-337-1717.